The number of cyclist changes up and down as an accordion

We just digested the emotion of the first day, with the usual excitement of anything that is beginning and its multiple form of celebration, and we were already taking our bicycle for the second day of our tour.
The evening before Thierry Robert Luciani told us of his young experience with the bicycle in Bretagne having the wind against him and his later professional experience as meteorologist with the need to “smell” the wheather.
We experimented both just leaving the hotel with all our luggages, having a medium strong wind exactly on our nose.
It was really a pleasure to find out that there was a group of around 10 people that were waiting for us: Angela Perin and Renzo, some cyclists from Ponti di Pace, others from FIAB-Bassano (that organized the event the previous evening), the Mayor of Cassola Aldo Marosa, and Renato Fabrello.
Renato will join us in Freiburg for the second part of the tour, but he decided to take his bicycle from his house nearby Vicenza (around 30 km from Bassano) and join us at 8.00 am to warm up his muscles and ride with us for the first part of this stage.
This group of 50 riders was forced to challenge the front-wind riding  along the Valsugana. With a so large number of cyclists it is not so easy to maintain the discipline and instead of ride in group to cope together the contrary wind, we decided to divide into several small groups…and the wind play with us.
After around 10-15 km Renzo Masolo, his young son and part of the group from FIAB, left us with warm regards. Just after few kms Gilberto and Eddy joined us but at the Cornale’ bike stop was the time for Ponti di Pace‘ riders to left the group and the number of riders changed again in the full spirit of an open ride as RWU.
At “Cornale” we had also the pleasure to have a sweet break with  polenta (a simple dish of this area, made with cornmeal) and milk, a traditional combination for our grandparents of this mountain.
An important landslide blocked part of the bicycle path and we were obliged to a deviation where other two friends from FIAB turned back their bicycles in the direction of their home.
At Borgo Valsugana we met Toni De Marchi that will ride with us until the end of our tour in Brussels, and after lunch Angela and Renzo said goodbye to us.
We moved quickly from Borgo Valsugana, worried to be on late for our event in Trento, so we established a strict timeline for the next passages. One of our riders, Stefano Gerosa, decided to keep his own slower speed and we agreed to meet again later at the conference.
After Pergine the first (short) uphill was waiting for us. As always happened, the first uphill is an opportunity to test our own legs in comparison with the other component of the group but the uphill was too short for it, such as an apetizer in comparison with the large meal waiting for us in the Alps.
The long and funny downhill to Trento was very quickly and we arrived in large advance at the main square in the City.
At 17.30 we had our evening event regarding the Energy topic with two professors from Trento University: Maurizio Fauri and Claudio Dalla Volpe. Before them the Alderman of the Environment and Mobility read the letter of Trento Municipality that he formally gave us and that we will deliver to the EU representatives on November 7th.
The presentations touched with different flavours the fundamental topic of climate change in connection with energy resources. Maurizio mainly underlined the technical aspects in connection with energy production and energy efficiency, while Claudio focused on the medium and long terms perspective of fossil fuels in terms of energy advantages, he also highlighted the importance of changing personal behaviors and development models.
The speeches and the following discussion were so interesting that after 2 hours of conference (happened after the previous more than 90 km by bicycle) we were forced to conclude the event, with the perspective of a warm shower and a good dinner that we had the pleasure to share with the two speakers. 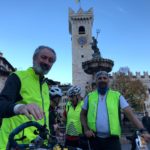 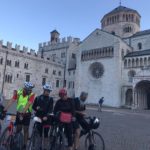 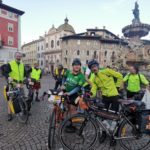 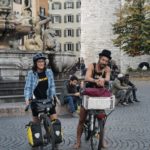 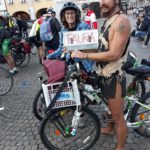 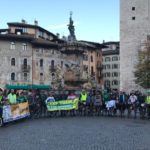 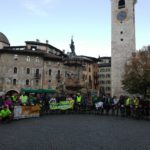 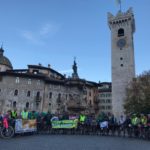 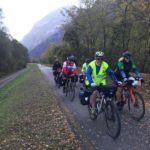 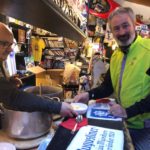 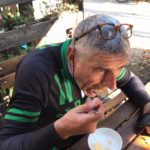 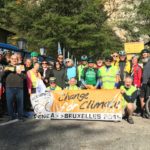 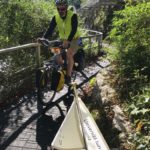 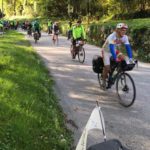 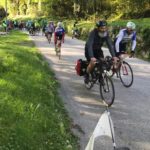 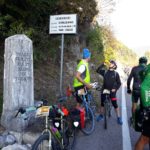 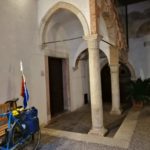 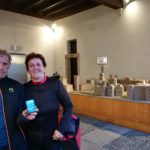 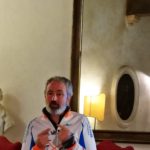 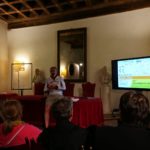 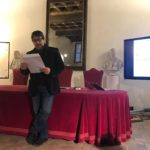 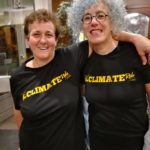 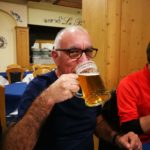