Today we rode the flat (or slight downhill) 100 km from Freiburg to Strasbourg with a favorable tail wind at a temperature of around 10°C.
After several days with difficulties due to the uphill, the cold weather and the snow we had a stage where  riding has been very simple and nice.
Karla and Mark of the Green Party in Freiburg rode with us all the 94 km to Strasbourg.
Before leaving the city they showed us a bridge which has been crossed by 3 million people since January!!!
In Strasbourg we were received by the representative of the Municipality of Strasbourg and of the local Friends of bike association and we rode together trough the city until the evening event’s site.
Here we had a nice chat with the City council delegate to active and innovative mobility Jean Baptiste Gernet, and other people like Sergio Assencio, in charge for the city of Strasbourg for the “mission bicycle”.
Jean Baptiste explained us that in the mid of ’90 the main square, before  becaming a pedestrian zone, counted a passage of around 40.000 vehicles per day.
The interesting thing is that,  after this decision, shops in this area haven’t reduced but increased their commercial activities and this place has  become one of  the more profitable shopping  areas in France.
Another national record of Strasbourg is that they have increased by 15% the number of people using regularly the bicycle on a daily base.
In the next weeks two more tram lines will be inaugurated, thus increasing significantly the number of people expected to use public transportation.
But now it is time for us to start thinking about the next stage, from Strasbourg to Nancy, the longest stage of our trip, with a length of around 154 km. 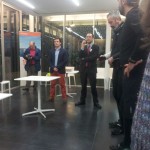 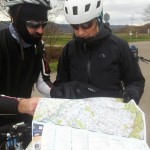 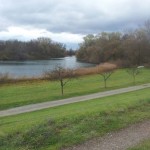 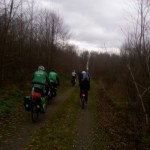 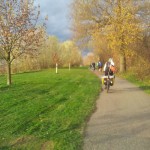 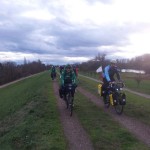 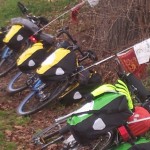 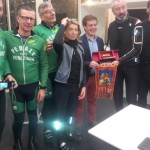 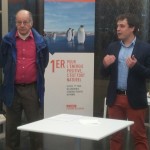