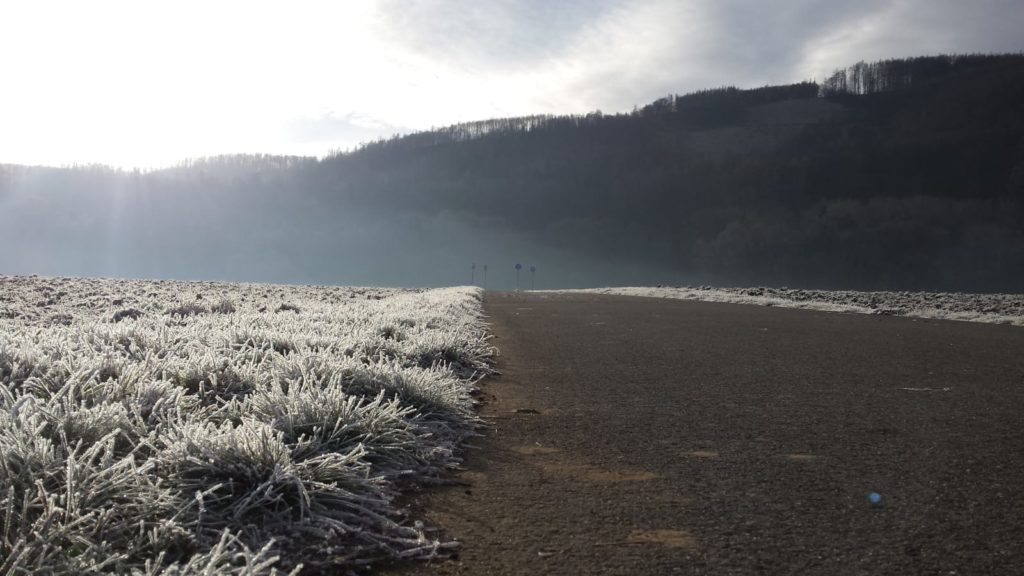 When we woke up, we first looked out the window, having in mind the slippery experience of the day before. The view was not encouraging at all, with a scenario of Prerov whitewashed by frost and a further mist that gave us a not promising feeling. We also get the bad news that Maurizio felt ill during the night and did not show up for breakfast.
Massimo suggested to delay the departure to see if the temperature will increase slightly, avoiding slipping with the bicycles on the road like a “soap in the bathtub”.

At breakfast there were not much bread and yogurt came in very small drops, certainly not the best way to start the day for a herd of hungry bison that will be ride in freezing cold for the whole day.
All signs that should not help to load the bags with the necessary determination. And on the contrary, as if nothing had happened, they moved in silence with the automatism of the last 10 days to pack up the bikes and make the last checks of the case.
Renato, one of the two doctors, offered to go with Maurizio by train so the group was reduced to 15 cyclists that left the hotel only 10 minutes late towards Ostrava.

Most of us were concerned to deal with icy and busy roads like yesterday. However, after a few minutes we started riding in a wonderful bike path that run for a long distance along the edge of a river and through very beautiful stretches of forest. Compared to the temperature of vegetables department of the refrigerator that we found in Vienna, now we moved to the frozen area.
At the beginning the temperature was about 4°C below zero, but the icy channel that we immediately crossed to the right, or the pond that we met soon after to the left – where some birds walked peacefully on the surface – gave us the feeling that all the available heat was already been absorbed during the night.

Most of the morning’s journey was characterized by only a warning that echoed from the head to the tail of the group: “ICE!”.
We have learned to recognize the different noises that wheels produced when riding on a frozen surface from the sound similar to a light rubbing that characterized the sections covered by a thick icy to the dry crackle that generated the iced puddles shattered by the passage of heavy bicycles.

After more than 20 km we emerged from the shadow of a hill, just when a shy sun appeared from the clouds generating an immediate pleasure to our legs that still could not warm up decently, despite the continuous movement.
The group now proceeded at higher speed and, despite the flat tire of Ivan (he punched only two times during the tour, so far from the top scorer Massimo who leads undisturbed our particular rank), the enthusiasm for the shy sun that went along us and the opportunity to ride on a beautiful track free from cars lets us enjoy the day.

At 18km left from the finish, after having travelled about 80 km without many stops in order to not cool down the muscles too much, we decided to have lunch. We stopped in a place that probably has rarely seen so many people in one go.
The only soup available was the one with garlic, so we went for that without any doubt, accompanied by only two slices of bread for 15 people and a truly excellent local beer. After 30-40 minutes we were ready to start again towards the goal. 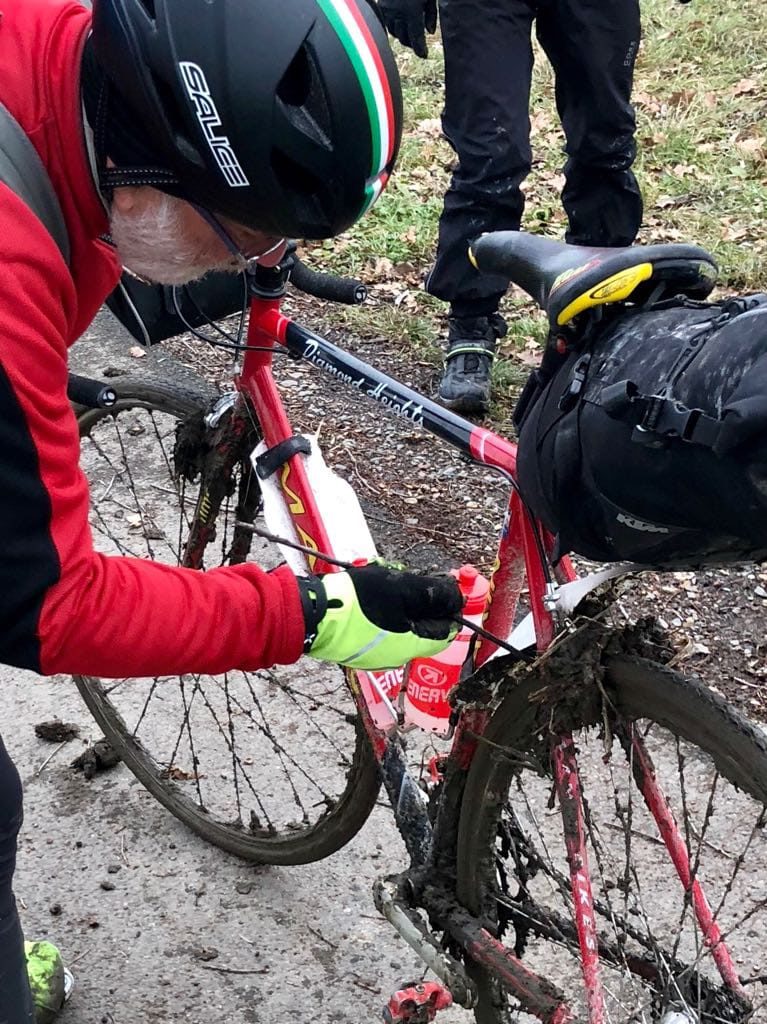 During the previous days, Massimo proposed a deal to all of us, with the intent to dispel the evil eye that seemed to mark the end of each track. The agreement was to talk freely about what we have already passed, beening careful about the present and avoiding without exceptions to talk about our future.
Toni unconsciously broke this agreement by declaring, considering the short distance that dived us from our hotel in Ostrava, that in less than an hour we will be at the hotel. Just the time to end the sentence and we entered in a segment of the track characterized by a field initially fairly solid, but then more and more soft and clayey, this made us wonder if we were really subjected to an evil eye. It was probably collapsed recently since during the previous days – when we crossed some similar icy sections – we pedaled like on a perfect road-surface.
The fact was that after a while, all the bikes started to accumulate clay on the brakes, under mudguards and tires and one at a time we gave up our stubbornness trying to continue for no more than 200 or 300 meters of off-road to arm ourselves with a few sticks to free the wheels from a sort of blob that seemed to grow without limits on the edge of the bicycle.
The most unlucky, however, was Gigi B., who in order to change rapport to lighten the bike broke the gearbox completely. A group portion proceeded towards the hotel, while five of us tried to solve the situation, under the constant direction of Dino.
The only solution was to shorten the chain to insert it on a fixed ratio and be able to bring it to a mechanic close to the hotel. Unfortunately, the first attempt was not successful because the chain remained a bit ‘too loose. We needed a further intervention, while the temperature dropped down rapidly and the sun went down. But, the bike finally worked again, even if sometimes it jumped to a bigger pinion that tightened the chain and blocked the pedalling.

Meanwhile, the first group asked for help to a house along the way to try to clean out the mud from bicycles. A kind old man showed up first with a single bottle and then with a series of buckets filled by hot water. He observed the group of cyclists – who showed up on their doorstep in December with their bikes completely muddied – carefully, but he did not interpose during the cleaning operations. In the end, however, he sentenced “It’s very stupid to go by bike in December in Checkia”. When he heard the reasons why we are conducting this long trip, it seemed to soften a bit his judgment, but we are not 100% sure.

The six of the broken gear proceed pushing in a limited way before, and then incessantly Gigi’s bike, with a well organized training. The first one followed the track by indicating the way to the group that were right behind, two closed the row to slow down the cars and the two in the middle in succession pushed Gigi. We crossed the dense traffic of the city of Ostrava exactly like this, and around 5.30 p.m. we also found a mechanic available to repair Gigi’s bike immediately.
The mechanic replaced: gearbox, chain, pinion and gasket at an absolutely competitive price. Therefore Gigi could finally came back to the hotel.

At dinner we could say loudly that we have completed even the penultimate stage. But tomorrow we will expect the last ride towards Katowice, hopefully without too many surprises. 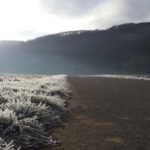 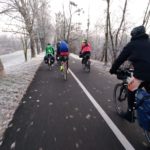 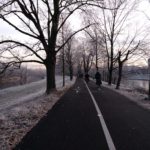 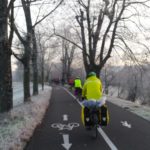 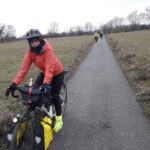 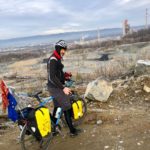 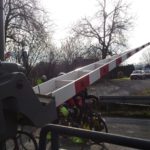 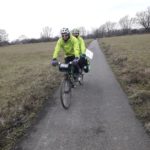 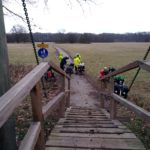 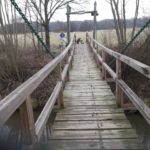 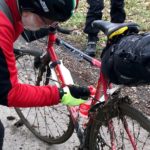 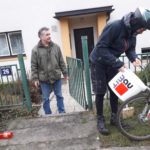 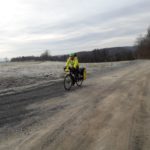 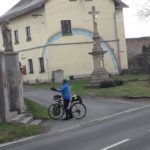 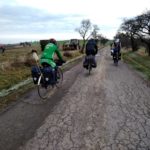 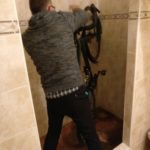