After the Fella, the Drava and the Salzach is the turn of the Danube! 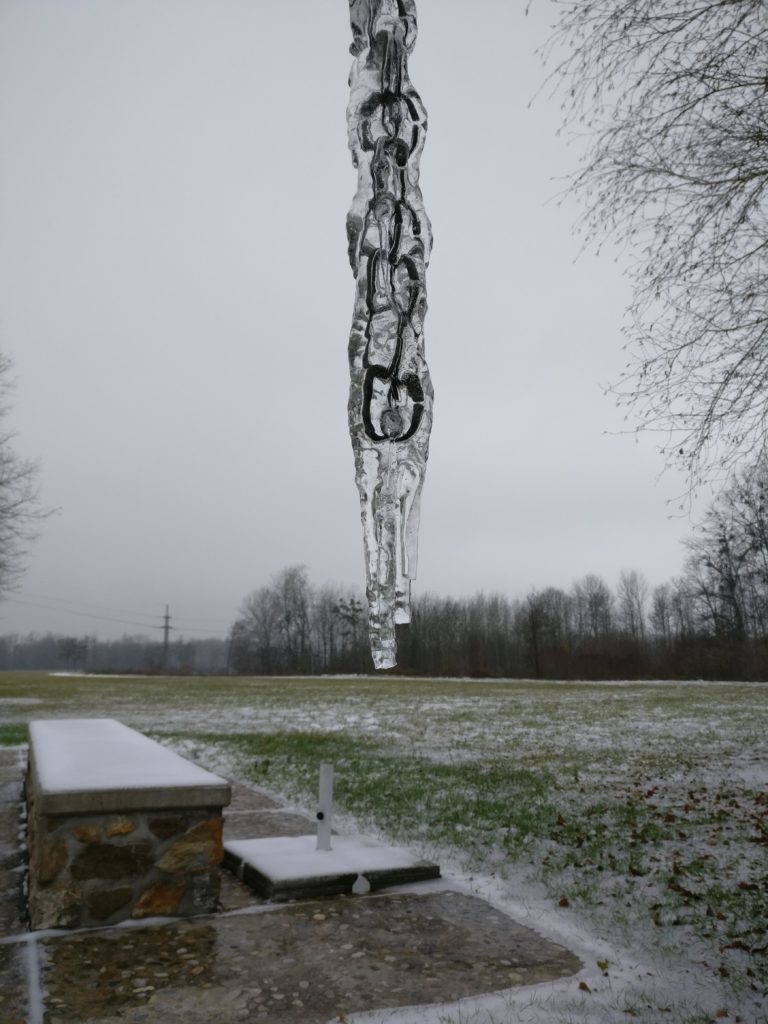 During yesterday’ stage (Salzburg – Linz) we left the wonderful Alpe-Adria bike path, that we went through from Udine, towards the famous Danube bike path that will bring us in Vienna.
Even today we will have to ride for about 145 km but we strongly believe that – compared to the continuous “rise and fall” of the previous days – this track will be a piece of cake since it is almost completely flat. Nothing far from this!

We left 10 minutes late because we had to wash brakes, shifters and brazed on that yesterday were often stuck due to the dirt. Roberto adjusted his brakes and could therefore slow down without wearing the sole of his shoes.

We passed through the desolated streets of a city that is still completely asleep and we imagine – with a pinch of envy – people wrapped in the warmth of their duvets.
We saw into the distance the strange effect of steelworks hazes that stayed very low and mixed with the natural mist, that we clearly recognized from the characteristic smell after having passed the plant. Just the time to overcame a chemical plant to the left and we were already riding the Danube Bridge that insert us on your bike path.
As soon as we looked out to the river bank, for the first time of our tour we had to face another crucial atmospheric event for cyclists: the wind. Only at this point, we realized yesterday luck: to had the wind at our back, that compensated the trackless hills.
He blew straight in our face and, although it was not one of those impossible winds to deal with by bike, it was just like it were raising the slope of the road indifferently.

The mental looseness with we were approaching this track, together with the headwind lets the group to disengage, avoiding to use our force to pass through the wind.
The temperature fluctuates below zero between -2 and -1 and the cold air that whipped our faces took us back to the duvets of Linz’s inhabitants. After about forty miles we stopped near a bike bar, closed for the winter season, to eat something without the comfort of a cup of warm coffee.

The path was generally clean, but there were also some snow-covered stretches that could also hide a layer of ice below that were difficult to recognize until one passed over it. The first of the group that passed it caused a succession of screams “ICE”, to recall in advance the attention of those who followed.

There were several falls, including those of Ugo, Roberto, Maurizio and Toni, fortunately all without any consequences.
At halfway, we were all tired because of the cold and the wind and we would already stopped, but we bit the bullet. In fact, we well know that in the afternoon, when even more fatigue takes over, is more diffult to keep riding, and we pulled up to the eighty kilometres.
At our classic cyclist menu composed by soup, bread and beer, we decided to add a slice of cake, perhaps for the unconscious need to mellow our journey. After the lunch break, like yesterday, Paolo discovered to get a flat tire. From this point, the day turned out in a “hole festival”. At the end of the day we counted three hole for Tiziana and Massimo, and one for Paolo e Marco.
Only Massimo, Dino and Daniele stopped with Paolo to not let the whole group cooled. Unfortunately, everything went in the other way around and the group exploded in a series of fragments that were not aware of the position of the others. Giampietro stopped due to a small problem with the wheel and when he started riding again he immediately gave up to reach those who preceded him at higher speed, deciding to ride on his own speed. We found him crossing the Danube Bridge on the opposite bank following a wrong sign along the bike path.

The next part of the track was a run-up trying to get together and separate again at the next flat tire (we counted 8!).
Meanwhile, it became colder, stacking many cyclists of the group. 20 kilometres from the arrival, it started snowing first and soon it turned into rain. We crossed Krems in the rain demanding to get to the hotel as soon as possible, but Gabriele fell, fortunately without any consequences. Along the last kilometres we collected, just like the Pied Piper, Ugo and Tiziana who were blew up their tires and then another group that had stopped for not knowing reason. The group grew, giving us the feeling of being able to collect them all, but at our arrival at the Hotel Toni, Augusto and Gigi C were still missing.

We were all wet and cold, our luggage were literally frozen covered by layers of ice and thick ice shapes even on the bell or on other parts of the bike.

Finally, after about twenty minutes, the last three reached us, Toni and Augusto who hitched a ride along the road (loading bikes and bags …) and Gigi with his bike.
They looked like the cold zombies, but after a hot shower, a good meal and a frank chat, not leaving anything unsaid between us, we were again in a great shape, ready to face the next track that will be completely in the rain. 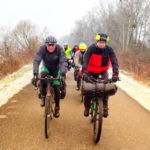 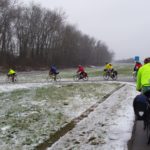 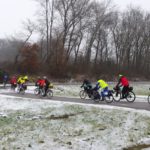 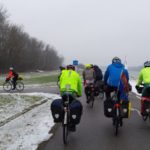 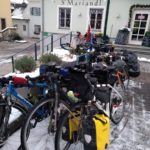 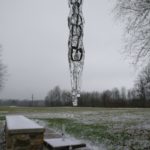